The Coalition strives to tackle tough emergency preparedness topics and to develop plans, processes and tools necessary for effective regional responses to healthcare emergencies. Through the strong commitment by members and with external partnerships, the Coalition has led, and continues to lead, the way on several important and challenging initiatives.

"The eventual goal is to have a statewide MOU among all Maryland hospitals."

In a first of its kind cooperative arrangement, central Maryland area hospitals have entered into an agreement to share resources during any type of man-made or natural disaster that may occur in the Baltimore region. The voluntary Baltimore Healthcare Facilities Regional Mutual Aid System’s Memorandum of Understanding (MOU) agreement has formalized the process of collaborating in the event that one hospital becomes overwhelmed during a disaster. This agreement allows all participating hospitals to work together during an emergency to share staff, beds, equipment, and supplies. Hospitals within the Baltimore Metropolitan region, which includes Baltimore City, Anne Arundel, Baltimore, Carroll, Harford, and Howard counties, are part of the first region in Maryland to complete such an agreement. Additional hospitals from Montgomery, Prince George’s, St. Mary’s, and Charles counties have signed the MOU. The eventual goal is to have a statewide MOU among all Maryland hospitals.

Maryland is susceptible to disasters, both natural and man-made, that could exceed the resources of an individual hospital facility. In the event of a local or regional disaster, the facilities will communicate with each other and offer assistance to the facility in need. This could include the transfer of patients between facilities in the event of an emergency evacuation of a hospital such as flooding during the hurricane season. 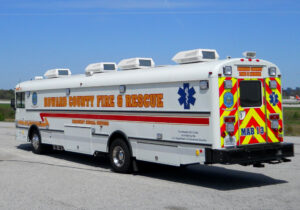 The Maryland Region III Health & Medical Coalition, in collaboration with the Baltimore Urban Area Security Initiative (UASI) Transportation Committee, developed an idea for the transport of greater numbers of patients from the scene of an incident. Utilizing Department of Homeland Security, UASI grant dollars, Anne Arundel County Fire Department and Howard County Fire Rescue Service collectively purchased specially-equipped buses to be used as emergency medical vehicles. The transit buses are similar to those built for school districts nationwide, but have interiors that can accommodate patients. The Medical Ambulance Bus (MAB) is configured to carry 14 on stretchers, 24 “walking wounded”, eight (8) wheelchair patients, or a combination of each. The MAB also carries six (6) medical personnel for administering care en route to a hospital. The interior of each bus features wall-mounted cots stacked two levels high, oxygen stations for each patient, a fold-out ramp at the rear of the bus for loading stretchers, and an under-floor generator for powering medical equipment and roof top heater/ air-conditioning units. Emergency lights and sirens are affixed to the exterior of the buses, which are painted in the colors of each jurisdiction’s fire department.

"The transit buses...have interiors that can accommodate patients."

In the event of a major medical emergency, whether it’s a bus accident, multi casualty incident, terrorist attack, or even a hospital or nursing home evacuation, it may be necessary to transport large numbers of patients. The conventional ambulance is designed for a maximum of two patients. The MAB’s with a 14 non-ambulatory capacity is a force multiplier allowing patient transport thus reducing the numbers of ambulances that would be required.

Aside from the two MAB’s in the Baltimore UASI, there are seven MAB’s in the National Capital Region. Three of which are located in Maryland. In a significant event they could be requested through mutual aid agreements or the Maryland Emergency Management Assistance Compact.

Communication is perhaps the most vital component in effectively managing emergency resources for routine daily incidents as well as for mass casualty events. Real-life incidents have taught us that the ability for first responders to communicate with one another is vital, but equally important is the need to track the movement of patients. Tracking patient movement provides first responders and first receivers with real-time situational awareness during a mass casualty incident and fosters the family reunification process.

"Real-life incidents have taught us that the ability for first responders to communicate with one another is vital, but equally important is the need to track the movement of patients."

In late 2009, the Maryland Institute for Emergency Medical Services Systems (MIEMSS) launched several upgrades to its statewide EMS communication system, including an electronic patient tracking system. This patient tracking system utilizes bar code scanners and the existing barcode of the Maryland triage tag. At present, all 21 acute care hospitals and the 7 EMS jurisdictions within Central Maryland are outfitted with this capability.

These mobile tracking scanners allow patient information to be entered, including demographics, vitals, chief complaints, field treatment, photographs, sound, and video. Utilizing internal GPS, patient location is mapped and transportation information is logged, including the time the patient left the scene and the time the patient arrived at the destination facility.

Through the reporting function of the MIEMSS communication system, receiving facilities have access to real-time data showing patients en route to their facility, along with all patient information gathered on the scene. Transportation officers have real-time access to hospital bed availability and mapping of nearest facilities and specialty centers. Incident commanders have the ability to view real-time reports of the total number of patients and their priorities. Through this integrated system, data on a patient can be tracked at any point as the patient moves through the EMS system. Everything within the EMS communication system is encrypted, thus ensuring HIPAA compliance, and follows all state IT security guidelines.

During a large-scale disaster, the existing healthcare systems within the affected area are unable to care for patients without altering the standard of care, due to the overwhelming demand and the lack of available medical resources for a period of time. In the course of a catastrophic event, despite efforts to strengthen medical surge capacity and capabilities, usual standards of care cannot be maintained and there may not be enough medical resources, making those resources scarce for all who need them. There is limited amount of guidance available, regarding how those scarce resources should be allocated during a crisis but relatively little of that guidance takes into account the values of the communities in which those decisions would be implemented.

"...this project revealed key areas in which the values of Maryland citizens may significantly differ from the work of subject matter experts."

The Allocation of Scarce Resource Project Team endeavored to foster the development of disaster response coalitions among healthcare institutions and government agencies and to promote public trust in response planning through transparent public dialogue. In order to accomplish this, the project team completed a five-year public engagement project in the state of Maryland. The early phases of the engagement process included a series of community forums to engage citizens across Maryland. The forums were held separately for both lay persons and medical, healthcare, and emergency responders and planners. There were two pilot sessions, six community forums, and seven healthcare provider forums. In both series of community forums there was dialogue about ethical principles and the citizen’s personal values regarding what they considered most important in determining how to make decisions with regard to allocating scarce life-saving medical resources during a catastrophic event. After completion of the forums, the project team compiled and summarized the entire amount of data gathered from all the forums. Once the data was compiled, the project team consulted with subject matter experts in order to develop recommendations for the State of Maryland to support policymakers and healthcare providers decision making process related to the allocation of scarce medical resources during the time of a disaster is consistent with the values of the communities in which those decisions would be made.

In conclusion, the methods used by the Allocation of Scare Resources Project Team provide an effective and replicable process for engagement around challenging health policy issues. The project team’s experiences demonstrate that a wide variety of Maryland citizens can and will engage in extended civil discourse with their peers and experts, which would allow them to explore challenging topics in a way that would provide an opportunity to develop more informed and deliberative responses. Although many opinions shared by Maryland’s citizens were consistent with national guidance, this project revealed key areas in which the values of Maryland citizens may significantly differ from the work of subject matter experts. These differences suggest areas for further exploration as well as thoughtful communication on the part of decision-makers.

A report titled “Community Values and the Allocation of Scarce Medical Resources in Disasters – A Public Engagement Project – Final Report” was completed on August 21, 2015 for DHMH and the Coalition to summarize the work of the project team. Finally, the project team is awaiting final approval from DHMH and the Coalition to develop the state-wide decision framework to allocate scarce resources.